I recently completed an installation of a small sound system in a church. That in itself is not remarkable by any stretch, but this church reminded me of an all too common occurrence. This church will remain anonymous, but many of you may think this blog is about your church.

This all started when the church who has been a mobile church for years procured a building of their own, and began the process of gutting the space and building walls and putting in infrastructure for power, phone, lights, and so on. I was contacted after the plans had been finalized but before the construction. I quickly went out to the site and previewed the space with a few key people, and by this time demolition and some construction had started. Wow, they were moving fast, so I had to get going with my proposal. We did some calculations and came up with a basis for the design, it was going to be a single speaker hang and maybe a sub-woofer to extend the lower range. We specified an amplifier and suggested a new mixer as well. The price was in the ballpark for them so we arranged a demo of the speakers in the new space that was under construction. When I got out there to the new site, I was amazed at how fast the construction was going and I started to get worried. I was worried because they seemed to be getting the cart ahead of the horse. Here we are with no serious approval or final system design, and they are about to close up the walls. To add to the stress, there didn’t seem to be any project manager, or anyone seriously in charge of a construction schedule.

There is more to this story, but let’s fast forward to the day I delivered some connectors to the low voltage electrician. A change in plans for the floor boxes landed me a quick trip to the job site for an emergency delivery of D style 1/4” connectors. I couldn’t believe what I saw when I went into the sanctuary, a projector was hanging right where I told the guys from the church the speaker would be, but the really bad thing was that there was a huge HVAC duct right behind that projector. This was preceded by the church deciding not to put in all the wire we had specified. They thought that by saving $200 in wire they would be money ahead, when in fact, if in the future they decide they need that wire, it will cost thousands in labor and materials. When it came time to install the speaker system, we had to make some serious adjustments to clear the projectors beam, and we had to compromise a bunch on speaker coverage and placement.

There are two major points to this story that I want to get across. The first one is simple and anyone reading this should agree. When undertaking a project like this, there needs to be a coordinator, or project manager. The manager should be in charge of all trades, and the construction schedule. Typically this person is also the called the General Contractor. The GC or sometimes the Foreman will make certain that one trade or segment of the construction doesn’t get ahead of or in the way of another segment of the construction. This would have been helpful with the HVAC guys putting their duct right in the way of our speaker. The church was so eager to get into their new building that they just threw caution to the wind and let everyone loose on the construction job. This ultimately cost the church a significant downgrade in the performance of the sound system that was designed for them. A little bit of foresight, patience, and cost would have improved their sound system investment by a considerable amount.

That brings me to what I feel is really driving me to write about this story, and is often a serious source of confusion for me. Let me pose a question for you; what is the part of church that all members participate in? Where do we all gather, and why to all the members gather there? What it the primary activity when gathered at this spot? You can see where this is going, right? For the life of me, I cannot figure out how the people in charge at a lot of these churches, decide to put the sound and media systems so low on the priority list. The point of going to church, not matter what religion in part is to hear the preacher or pastor speak. We also go to be a part of the praise and worship. At some point we are all there in that one room. It’s the one place that we all gather. It often is where the the mission of the church is communicated and funds are raised to make that mission possible. This area is central to all members, no matter what else goes on in that building and what other aspects of the church different people are involved in. Why would anyone consider mediocre, or even less than that, sound quality? How do you reconcile the need to have beautiful carpet, chairs, floral arrangements, and a coffee bar, when people are struggling to hear the pastor speak, or putting up with a worship team that sounds like a garage band? I know that being from the audio world, I have a stronger feeling about this topic than some, but I haven’t had anyone argue that a good sound and media system distracts or impedes the mission of the church. Nothing is worse that sitting in church and constantly thinking about how bad things sound, instead of listening and contemplating what the talker is speaking about.

As a former tradesman, I learned that a job can only be done as well as the tools of the trade will allow. Good tools yield good results. If your sound and media team is constantly handicapped by the tools, the results will be less than desired. I was once told that a good sound system should be conspicuously inconspicuous. In other words, the members of the church shouldn’t be thinking at all about the sound or media systems in the church. Bad systems destroy and distract from the real reason we are all gathered in that room. Put the sound and media system first in the priorities, because ALL the church members and the church benefit greatly from it.

Looking for a Digital Console? 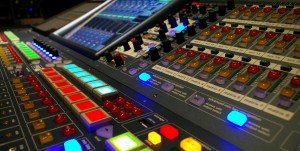 You're in the right place if you have questions about what digital console is right for you. We've been mixing on digital for 20 years and have used all the major manufacturers. Give us a call and we'll help you decide what console meets your specific needs.

A Blog is What I Need